Anna, Elsa, and Olaf – oh my! Disney’s FROZEN is now available  to own on Blu-ray, DVD, On-Demand, and Digital HD! Are you “elated or gassy or somewhere in the zone” yet?

arrived. Of course, we watched the movie that very evening. It was even better than we had remembered! It wasn’t fair to keep the fun all to ourselves though.

So, we reserved our complex’s theater room and got ready for an impromptu movie night. Everyone was excited and we even had a few special guests for our mini-premiere. It wasn’t surprising that all the kids and their parents loved it (except for one dad that was snoring toward the end but I guess he was super tired).

When the movie was over and the bonus music videos were playing, we decided to open the door to get some air as we cleaned up. A couple of kids were swimming in the pool just outside and must have heard the music. They had to find out what was going on and one little girl was even hiding behind the door, trying to peek in at the screen. It was so funny! The movie was over and she was dripping with water so, while she couldn’t be a part of our movie night, we did send her off with a few cupcakes for her sibling and father waiting outside 🙂

The music videos has us singing “Let It Go” in four different languages and the ‘Making of Frozen’ was pointlessly enjoyable.

To continue the adventure offline, here are some exciting activities that include printable coloring pages, games, projects, and more. 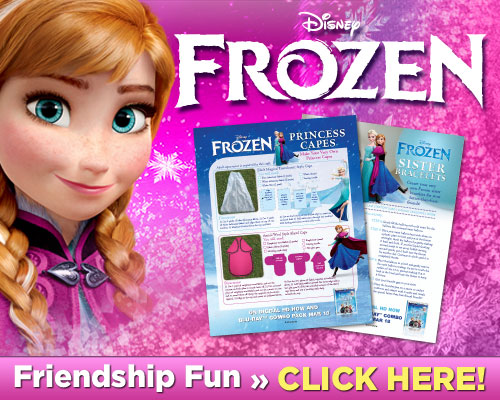 Have you picked up a Frozen Blu-ray Combo Pack yet?

Womens’ Health: I’m a 35-Year-Old Mess Thanks to Perimenopause Symptoms!

I have to go out today and get this. I can’t wait to watch it again!

I already watched this movie. And I love it so much.. I enjoyed watching it.

My boys watched this movie with my in-laws, and they were quick to come back and say they didn’t like it that much. That really surprised me a lot that they would say that. I expected them to love it. They both love music a lot, and they stated it had way to much music in it. I wonder if they were just saying they didn’t like it because they felt it was more of a “girly show?”

How fun! We’ll be buying this video. I’m excited that it’s out on DVD now. This was a good one. 😉

I wanted to get Frozen for my birthday. I think I’ll have to buy it for myself.

Looks like some fun is going on at your house!!! Always fun to have free activity sheets to do!

We have not gotten our copy yet – but I know my daughter is really anxious to add it to our collection. Isn’t that pull apart Olaf the best?! I can’t wait to put him out with our Christmas decor this year 😉

My kids would of loved these activity sheets, Frozen was a great, great movie!

My kids haven’t seen this yet but they’re looking forward to watching it.

I’m so excited that this is finally on blu-ray!

We saw it twice in theaters and have watched it three times since we got the digital version- and my son has watched it even more on the iPad! He’s been singing both “Let It Go” and the Making of Frozen song for weeks.

My girls sing the songs non-stop and can’t wait until we pick up our copy. Thanks for the printables!

We can’t wait to see this but it has been unavailable to rent everyone has it checked out.

Thanks for sharing! My son and I watched this movie last night and loved it. 🙂

We bought this DVD this past week on vacation and the boys have watched it about a bajillion times already.

Love this movie. Thanks for the activity sheets. So fun.

We really enjoyed Frozen and can’t wait to own it! I am going to include it in the kids’ Easter spread. I know they will have a great time doing a themed activity as well.